Couplet given to Chan Heung by Choy Fook

This diagram is a representation of Shaolin knowledge handed down from three monks to Chan Heung. The diagram also shows the direct line of birth of the Chan family. Master Chan Yong Fa, fifth generation descendant, is the current keeper of the style and the head of the Chan Family Choy Lee Fut organization.

The founder of Choy Lee Fut

Chen Heung, the Founder of the Choy Lee Fut system of Kung Fu, first taught his art nearly two hundred years ago. From the age of seven, Chen Heung was taught martial arts by his uncle and village elder, Chan Yuen Wu. Chen Heung showed great promise – though only a boy he was strong and quick to learn. He had a natural ability and his uncle recognised this and spared no effort in teaching him all that he knew. Chen Heung made such remarkable progress that he was invited to set up a school for his uncle in the town of Sun Wui.

In 1823, as Chen Heung’s reputation grew and his school prospered another instructor by the name of Lee Yau San came to teach in the neighbourhood. Lee was a disciple of a Shaolin monk, Ji Sin, and a 5 family elder. Chen Heung, being strong willed and a lover of a good fight, decided to test his skills. He ambushed Lee as he was leaving a restaurant and tried to throw him to the ground by putting both his arms around Lee’s waist. However, Lee took the attack calmly, bent his knees slightly, and lowered his chi and centre of gravity in such a way that no matter how hard Chen Heung tried, he could not make Lee budge. Lee then spun around, lifted his foot to trip and kick at the same time, and threw Chen Heung yards away.

Lee was rather curious about his assailant upon seeing that Chen Heung was able to leap up uninjured after his fall. Lee complimented Chen Heung, then demanded to know what school he belonged to, and the reason for attacking him in such a sneaky fashion rather than challenging him properly to a fight. Chen Heung felt ashamed, and replied that the attack was his own idea in an attempt to test the inadequacy of his own skill, and that he did not want to implicate his teacher for his own defeat. Lee, amused at this reply, left Chen Heung in his bewilderment.

Days later Chen Heung learned that Lee had remarked that someone as young and strong as Chen Heung, with such intelligence and ability, was wasting his life and talent because vanity prevented him from improving his skill. Chen Heung then realised the truth, that there was no limit to the art of kung fu. He immediately resigned his post as chief instructor and was accepted as a student by Master Lee Yau San. Chen Heung was 17 years old and was Lee’s disciple for five years. This training took his skill to new heights.

Lee Yau San and Chen Heung heard of a reclusive monk by the name of Choy Fook, who was living in temple on mount Law Fou. This monk was renowned for his skill in Chinese medicine. Lee told Chen Heung that if the monk was so skilful in dit da (treatment of muscular and skeletal injuries), he must also be skilful in martial arts. Bitten by the bug of curiosity, Lee and Chan decided to visit this monk immediately. On reaching the temple gate, they encountered a man, old in years, yet tall and muscular, with a penetrating gaze. He claimed that he was a disciple of monk Choy Fook and invited the two visitors to enter the temple and take some tea with him while waiting for his teacher’s return from his daily rounds.

While the two visitors were seated, the old man proceeded to chop the wood to boil the water, doing so with his bare hands. Lee’s curiosity was aroused. He commented to Chen Heung that this old mans kung fu was quite good, and that if he was showing off for their benefit it meant they must reply with some of their own tricks. Lee got up and walked to the side of a stone rice grinder that was lying next to the temple steps. (A rice grinder consists of two circular slabs of granite approximately 24 inches in diameter and 9 inches deep joined together with a dowel in the centre. Rice is put between the two slabs of stone and ground to flour for cooking.) He first loosened the soil around the stone slabs, then stood back and kicked the rice grinder clean off the ground. The old man watched with amusement. He then walked up to the rice grinder and chopped off a corner of the top slab, pulverising it with his bare hands and throwing the powder in front of Lee, announcing that he was indeed Choy Fook and that the powder was a memento for intruders who did not behave in a proper manner.

Lee, filled with respect for Choy Fook, thanked the old man and left immediately, leaving Chen Heung behind to deal with the situation. Being a guileless young man devoted to martial arts, Chen Heung realised that this was an opportunity to further his training under another teacher of superior skill. He immediately fell on his knees in front of the monk and begged Choy Fook to accept him as a disciple. Choy Fook surveyed Chen Heung in silence – taking in the young man’s mannerisms – and finally concluded that the request was a genuine one. He smiled and said to Chen Heung that if he wished to be a disciple he must obey the following three instructions or else he must leave immediately:

Chen Heung must stay with him in the monastery for at least ten years until the end of his apprenticeship;
Chen Heung was forbidden to use his skills to kill or to maim, and must never be boastful of what he attained;
Chen Heung must kick the rice grinder back into its original resting place. This last instruction was a test set by Choy Fook to ensure a heavenly mandate for teaching Chen Heung. If Chen Heung was successful, that would indicate a good omen and heavenly permission for Choy Fook to take Chen Heung as a student.

Much to Chen Heung’s delight the rice grinder fell back into its old hole easily, and he became Choy Fook’s disciple.

For the next ten years, Choy Fook taught Chen Heung kung fu with great discipline and precision. Each new technique took days to learn, and Chen Heung had to master each new movement with speed, accuracy, power and understanding before the next could be taught. Chen Heung found his kung fu improved remarkably, and was very different to what it had been. The knowledge passed down by Choy Fook, whether bare fist techniques, the staff or wooden dummy training aids, etc., was endless and full of subtle changes, like nature itself. A combination of hard work, dedication, natural ability, and the karma of a good teacher enabled Chen Heung to complete his training within the ten-year period.

Although he was quite willing to send Chen Heung home in 1835, Choy Fook continued to say that to be a true follower of Shaolin, one must also seek the way of the Buddha as well as learning medicine and the ‘six magic spells’. Hearing that, Chen Heung decided to stay for an extra two years until he was ready to leave the monastery in the twelfth year.

At the time of his farewell, Chen Heung asked his teacher to spell out his future. Choy Fook told him that although he was not meant for the life of a court official (by sitting the martial examination), he and his offspring would be leaders of men as long as the Shaolin tradition was kept alive. Amongst other advice given, Choy Fook gave Chen Heung a double couplet which time has proven to be authentic:

The dragon and the tiger met in heaven,

to revive our Shaolin ways.
Teach your followers righteousness,

let each generation uphold and enliven.

Chen Heung returned to his village and set up a clinic to treat the sick and help the poor. Later he was persuaded to set up a school in the village ancestral hall. He called the place Hung Sing Gwoon and his clinic Wing Sing Tong. Instead of selfishly calling his brand of Kung Fu the Chan style he chose the name Choy Lee Fut: Choy in honour of monk Choy Fook, Lee in honour of Lee Yau San and Fut meaning Buddha (in Cantonese) to commemorate the Buddhist origin of the art, since all three of his mentors could trace their lineage back to the Shaolin temple. 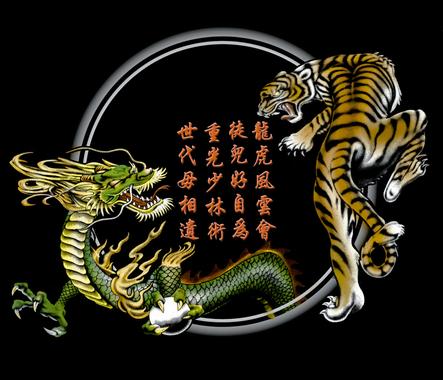 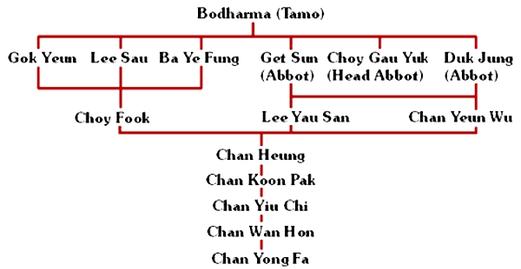